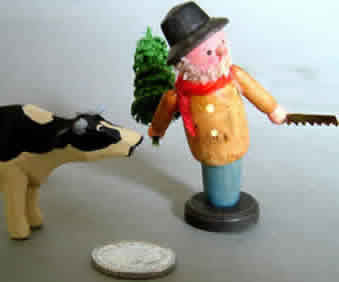 Forget Lapland and Father Christmas, cease searching for Gusepie’s fictional workshop where Pinocchio was created. The real ‘toy-land’ is alive and well in old Saxony, This beautifully rural East German region encompasses the Erzgebirge mountains that shares a border with the Czech Republic. This whole area is dotted with small medieval towns and villages with half-timbered buildings that would be quite at home in any European fairytale. In fact when I reached my destination, the toy-making village of Seiffen, I had to suspend belief that this little community was part of a Disney film set.

A long winding country road slowly dissolves uphill into the main street of Sieffen where private homes and small shops share the roadside. Everywhere are large carved, turned and painted wooden signs, many of them animated, pronouncing proudly the local toy making tradition. At the village centre is the church, which itself features in some of the toys. All around are small factories and workshops, some built in the Alpine style of the region.

One has to ask the inevitable question, how did this toy making tradition start? To find the answer we have to travel back to the 14th century with the discovery of metal ores, especially silver and tin. The rich mountain towns such as Annaberg and Marienberg were founded upon the riches extracted from the Erzgebirge mines. By the middle of the 17th century mining was in decline although the last mine to close in Sieffen was in 1849.

Miners were familiar with wood, it grew all around them, it was used in the mineshafts, to build mining machinery and for their wooden houses. As a pass-time, they carved wood through the long winter nights into figures depicting their own mining community and those around them. Figures in traditional costume holding and working with the tools of their trade were very popular.

Coinciding with the major decline in mining was the introduction of pillow lace making. In 1571 one Barbara Uthmann was employing over 900 women making lace, there were approximately 10,000 by the end of the 16th century and by 1845 the figure peeked at 40,000. Pillow lace requires up to 100 wooden bobbins per worker, that’s a lot of bobbins and a lot of work for the lathe. The first documented woodturner in Seiffen was described as a maker of plates and spindles (bobbins?). A turner from Seiffen is known to have travelled to Leipzig fair as early as 1690 and from the mid 18th century ‘goods from Sieffen were well known on the European market.

By this time figures and toys comprising of a number of turned elements rather than purely carved items were well established and from 1810 the ‘discovery’ of ‘hoop’ (ring) turning enabled the toy makers to extend their range considerably. Turning profiled rings that could be sliced into many single animal shapes to produce farm yard and Noah’s Ark toys efficiently added greatly to the toy maker’s repertoire. 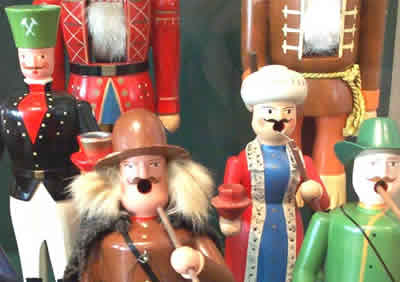 It is perhaps the ‘smoking man’, or ‘manikin’, that really brings out the essence of the characters of the area. These small figures represent the traditional occupations of the region over the last few hundreds of years, miners of course, but also peasants’, itinerant salesmen, village sweep and postman. The one thing all these manikins have in common is that they smoke a pipe. A traditional German carol starts with; a man with nothing in his mouth is a poor type. And never will a man among us be seen without a pipe… This is a reference to the ubiquitous habit of smoking among men at the time. These smoking men are made in two sections and when the top half is lifted, usually at the waist, a metal cup is revealed. A fragrant ‘candle’ is placed on the cup and lit. The two halves are reunited and soon perfumed smoke emanates from the figure’s mouth, there is no flame, the ‘candle’ just smoulders slowly. 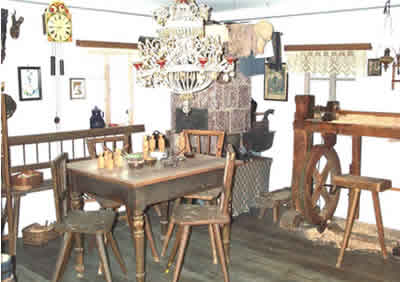 Much of the Seiffen toy makers’ production is concentrated on the Christmas market. Indeed, the Village itself is one large festival during the three weeks leading up to Christmas. With new fallen snow reflecting the lanterns and candles of the evening processions to the church from where traditional music is played and carols are sung, the place is thronging with visitors who want to celebrate the festive season in a truly wonderland setting.

Many of you will be familiar with the so-called ‘Christmas Pyramids’ incorporating piers of seasonal figures such as angels, the nativity, and musicians, all set in motion by the rising warm air from decorative candles turning the horizontal fan at the top. These were made from the early 1800s to decorate the local’s own houses, not till 1902 were they first produced commercially. Over the years they have become more elaborate, made possible due to the many lathe turned components. Since the 1930s some communities have built giant versions several metres high in the town squares as part of their seasonal celebrations.

To ensure all this is secured for the future Sieffen hosts a school of toy making. It is furnished with first class machinery; a whole shop is devoted to woodturning and boasts a long bank of lathes that would be the envy of most in the teaching profession. The second shop comprises of every machine required in the manufacture of toys. The students normally attend for three years after which they are fully grounded in the trade and are eagerly sought after by the local manufacturers. The school, which on my visit appeared to have an equal number of boys and girls, is sponsored by the local Toy Makers Guild.

Sieffen boasts a wonderful museum covering the whole history of the region. The collection is displayed on two floors and is a must for anyone interested in the history of woodturning and toy making. There are reconstructed rooms representing a toy maker’s living quarters and a ‘hoop turners’ workshop plus a collection of antique lathes.

Never have I been in a town or village where it appears the whole community is involved in the production of so many diverse objects made of so many components, but with a common theme, and all based upon a long tradition. What impressed me is the attention to design and standard of finish of everything these craftspeople produce, be it a small tree decoration or the most expensive ‘Pyramid’. What is more, the people in the Erzgebirge Mountains are proud of their history and do all they can to promote and protect it. Long may they do so. 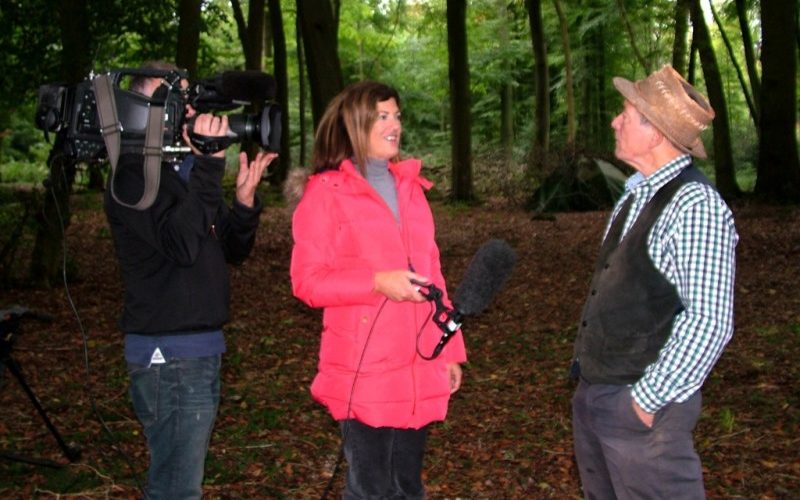