You are here: Home / Article / Bone up on Bobbins : the craft of lace bobbin making

‘Yon cottager, who weaves at her own door,
Pillow and bobbins all her little store;
Content though mean, and cheerful if not gay,
Shuffling her threads about the livelong day,
Just earns a scanty pittance, and at night
Lies down secure, her heart and pocket light.’

Lines written by the poet William Cowper (1733-1800) describing the plight of lace makers in his hometown of Olney, north Buckinghamshire. For the most part lacemaking was an occupation of the poor, mainly women and children, and although the financial rewards were low it often made the difference between independence or the workhouse. 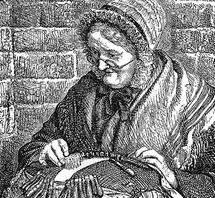 Bobbin or pillow lace was never more than a cottage industry but according to a petition of 1698 more than 10,000 people in England were employed in the trade. 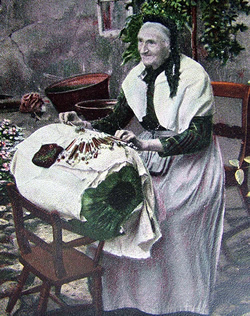 The earliest records of ‘bone’ (pillow or bobbin) lace go back as far as the mid-16th century. Charles the First is said to have used 994 yards for twelve collars and 24 pairs of cuffs, and the trimming of the king’s night-clothes required another 600 yards. There were two main areas of production in the UK: Honiton in Devon and the East midland counties of Northamptonshire, Bedfordshire and Buckinghamshire. By 1770 the industry went into decline and in 1880, from Olney, William Cowper wrote ‘I am an eye witness to their poverty’. Bedford lacemakers in 1768 were said to be earning between 8d-10d (31/2p – 5p) a day. After a brief revival in the early 19th century, machine-made lace put to rest for ever the romantic image of the lacemaker sat at her sun soaked, rose covered cottage door with just the jingle of her bobbins for company.

Bone, bobbin and pillow lace are all descriptions of the same thing: lace produced with the use of many threaded bobbins on a pillow which is supported either on the makers lap or upon a special stand called a ‘horse’. Most lace designs required the use of dozens of bobbins at any one time, all suspended by their threads and woven in and out as the pattern dictated. This need for bobbins will have kept many specialist bobbin turners busy through nearly 5 centuries. The term ‘bone’ lace derives from the fact that many of the early (and some later) bobbins were turned from bone, often Ox or Mutton. In Twelfth Night, Shakespeare wrote of ‘the free maids that weave their thread with bones’. In the mid 18th century one could buy a dozen for a penny; in the 19th century bobbins made of wood were about half the cost of bone. 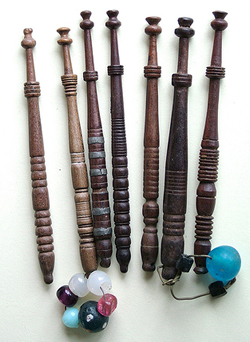 It was the bone bobbins that often carried inscriptions, usually delineated by the use of small dots drilled and coloured.

Inscriptions were various, many relating to historic or local events such as a public hanging; ‘JOSEPH CASTLE HUNG 1860’. The friends of Castle’s wife held a party outside Bedford gaol on the night of his hanging and gave all the guests who attended an inscribed bobbin as a momento. Other inscriptions relate to religion, anniversaries and love, the latter probably being the most prolific; ‘KISS ME QUICK AND DON’T LOOK SHY’ ‘I AM YOUR LOVER MY DARLING’ ‘ I LOVE YOU MY BLUEBELL’ and ‘YOUR HEART OF OAK FOR EVER’. Bobbins with special inscriptions could be ordered at many shops while others were sold door to door by hawkers or were to be found at fairs and markets.

Charles Freeman, in his book Pillow Lace in the East Midlands states:

the production of bobbins formed a trade in its own right. Richard Kent, a ‘bobbin maker’ was buried at Olney in 1728. Joseph Haskins is described as a ‘bead and bobbin maker’ in 1830. Samuel Wright of Cranfield was a bobbin turner, pillow and lace horse maker, and lace bobbins were turned on a water driven lathe at Stoke Mills, Sharnbrook. Percy Keech, a Stevington carpenter, turned wooden bobbins (mainly Plum) on a 4 foot lathe.

There does not appear to have been a bobbin turner’s lathe as such but rather each turner used what was suitable and available to himself.

On close examination of many bobbins it is evident that a great number were turned using some form of bow lathe. The evidence for this being small ‘centre’ indents remaining at each end where the wood (or bone) pivoted between the lathe Poppets (stocks). I have in my collection four large ‘Gimp’ or ‘Yak’ bobbins also said to be turned on a reciprocating lathe, but in this case produced with a pole lathe by a Chair Bodger from the Buckinghamshire village of Beacons Bottom. On other bobbins there is only one pivot point indicating that these were probably turned using a lathe with continuous rotation such as a treadle wheel lathe. 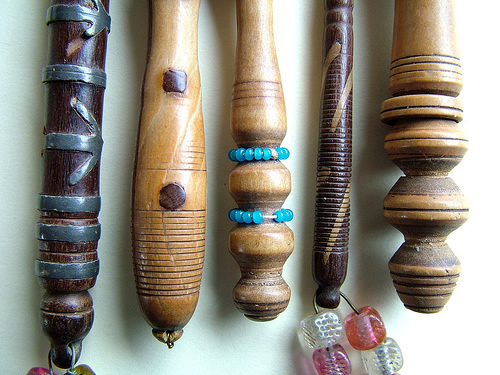 Apart from bone and the rare use of metal, wood was the most commonly used material. Timbers used tend to reflect those species indigenous to the areas of manufacture; it is unusual to find the use of exotic woods although these are extremely popular with contemporary lacemakers. Fruit woods, especially plum and cherry are common; Yew tree, beech, Box, Sycamore, Walnut, Ash, Birch, Spindle and Dogwood are among other hardwoods used.

Although the financial rewards were probably minimal I think many of the old bobbin makers must have enjoyed their work.

One has only to admire the variety, inventiveness and imagination that went into these miniature works of art to appreciate that they were not only tools of a trade but designed to give both tactile and visual pleasure. Apart from ‘Honiton’ bobbins and some of the ‘Bucks Thumpers’ most were drilled at the base to enable glass beads and other ornaments to be attached by wire. These are known as ‘Spangles’ and provide additional weight to keep the thread in tension.

Some wooden bobbins were decorated with pewter inlays, often referred to as ‘Butterflies’. Pewter was also incorporated as captive rings and at other times inlaid dots and referred to as ‘Bedfordshire Leopards’. Some of the most attractive bobbins to my mind are those made from two contrasting woods, either joined length ways with contrasting wooden rivets or with a round mortise and tenon. The ‘Cow-in-calf ‘is normally of two differing timbers, these consist of a hollowed body in which a miniature bobbin is secreted and secured with a push-fit top or base. Aqua fortis (nitric acid) produced a mottled effect when dabbed on the surface of wood by staining the area a dark brown.

Perhaps the most intriguing of all bobbins are the varieties with apertures, within which are contained visible miniature bobbins, Wooden balls and beads etc. These are known affectionately as ‘Mother and Babe, Church Window or Bird-cage’. A few years ago I produced my own version of a ‘Mother and Babe’, it consisted of a glass tube with Boxwood top and base with a miniature bobbin (the babe) free to visibly slide up and down the main body.

Photos and illustrations of bobbins

For more photos and illustrations of bobbins and lace-making please visit the Lace bobbins gallery on this website.