You are here: Home / Article / History of the Lathe: part three – mechanical power 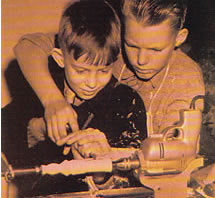 From classical times man has harnessed wind and water to work heavy machinery, to relieve him of hard physical labour and to speed up production. A Roman settlement C.200AD in southern France boasted sixteen water mills for grinding corn. It may be that this form of motive power was used to drive lathes also but if it was there seems to be no record of the fact. If this were the case, it would have probably have been the exception rather than the rule.

It does appear that the woodturners of old were content to continue with their tried and trusty traditional methods long after other sources of power were available to many of them. There were good economical reasons for this. No advantage was to be gained by expensive investment when the simple reliable technology of the strap, bow, pole and latter wheel lathes was usually just as efficient and more reliable.

We know that water driven lathes were used in some European countries during the last two hundred years or so. Plumier, in 1701 describes a water wheel powered metal turning lathe. In Bulgaria waterpower was used for turning the large diameter tops for traditional low tables. Bowls were turned in some alpine regions using this readily available source of motive energy. In the English village of Tintern early last century chair legs were produced on lathes driven via water wheels, probably a new use for a mill that was originally built to grind corn.

In Northwest England in the early nineteenth century the ‘Bobbin Masters’ of Cumbria had installed water wheels to drive lathes in their bobbin factories. This was in response to the huge demand for wooden bobbins required by the ever-growing cotton spinning mills of Lancashire, at a time when the industrial revolution was expanding fast. By 1854 the waterwheel at Stott Park bobbin mill had been replaced with water turbines. Turbines were much more efficient; they consisted of a large shaft-mounted propeller submerged in a duct through which the water flowed. The force of the water turned the propeller and shaft and by means of gearing drove the machinery.

An Englishman, Captain Thomas Savery built the first practical steam engine in 1698. Early steam engines were huge and developed to pump water from mines and later to drive heavy engineering machinery (including metalworking lathes) to produce machine tools. By the middle of the nineteenth century steam engines were to be found driving woodworking machinery in a few factories and even in specialist woodturneries such as the Cumbrian bobbin mills.

The first internal combustion engine was built in 1860 but it was many years before it was produced in small reliable units of sufficient power suitable to run a lathe or two. By the turn of the nineteenth century these ‘oil engines’ were employed in some small factories and woodworking shops, particularly those involved in ‘production turning’. James East of Chesham, Bucks, ran a number of wooden bedded lathes from a single engine via line shafting mounted in the roof space. The line shaft was kept in continual motion. The flat belt drive to the lathe could be disengaged as desired by maneuvering the belt from a fixed pulley onto a loose pulley (‘fast and loose’) using a simple lever.

As these oil engines became more reliable and compact (and cheaper) they also became popular with ‘one man band’ woodturners with small workshops. A case in point was Charles Dean, a Holmer Green chair bodger. Charles began turning with a pole lathe in the local woodlands. In 1924 he installed an oil engine in his back garden shed to drive a lathe and in addition a bandsaw and circular saw. Mechanization was at last within reach of the village turner! In the 1920s Charles friend Harry Tilbury immigrated to Australia. A letter from Harry to Charles dated April 1923 read “Guess the old pole lathe will soon be a thing of the past, haven’t heard that you had got the engine in yet, but I suppose it is to come. Guess a fellow won’t recognize the place if he happen to get back there?” How right he was, Charles son Alan used the same lathe until his death in 1982.

Garden rakes have been manufactured at the ‘Rake Factory’ in a small Kentish village since Victorian times. Little has changed over 150 years; most of the original machinery is still there and working, connected to the original line shafting. The old steam engine is long gone; it was replaced by a large diesel engine from a scraped lorry decades ago. One of the machines it powers is an unusual ‘rounding’ lathe. It consists of a wooden headstock within which is housed a wooden pulley and bearings. The drive-chuck end of the headstock contains a square recess to receive and rotate long squared section ash stock to be converted into rake handles. While the Ash stock is slowly turning a hand held ‘Stail Engine’ or ‘Rounder’ is fed over it from the free end and slowly coaxed along the complete length. This is a very efficient method of converting long, thin section square material to round. Close by is another, slightly latter rounding lathe. With this example the squared section timber is fed in one end, passes through a set of revolving knives and emerges through the other side completely round.

For the large majority of us today all that is required to run a lathe is to push a button and the magic of electricity does the rest. My first experience of woodturning was with a ‘Black and Decca’ electric power drill and the purpose made lathe ‘attachment’, all set up on the kitchen table. Electric motors provided a compact and powerful drive force and allow modern lathes to be built as complete portable self-contained units. Reliable electric motors have been available for about a century; I rescued a C.1910 1 hp motor from an old woodware factory some years ago that was used for driving a lathe. It is still in working order and linked to a lathe of the same period.

Many production lathes, whether driven by electricity or other power source were single speed only, By the middle of the 20th century self contained lathes with integral electric motors having stepped pulleys were developed, the Myford ML8 is a good example. It was ‘portable’ lathes such as this that made woodturning more accessible to the individual and hobby turner. Stopping the lathe to change the drive belt onto another pulley can be tiresome when there is a requirement to do so regularly. In recent years there have been several advancements regarding speed changing with out the need to stop the lathe.

Some time ago Poolwood introduced the ‘Poolwood 28-40’ incorporating a variable cone belt drive operated by a handle. This allowed the operator to change the running speed without the necessity to stop the lathe, but in doing so there is a small loss of power due to the extra gearing involved. This power loss problem and complex gearing has now been eliminated by the development of direct drive through the motor itself, the speed being controlled electronically by the turn of a small knob. At the moment this technology is expensive but I think it will prove to be the way ahead. In the mean time many of us will still be switching the motor on and off to change the spindle speed via pulleys and a drive belt.

Next >> Part 4: The Machine Takes Over