You are here: Home / Article / How I built Leonardo Da Vinci’s lathe

How long has man been turning wood? Almost certainly longer than we have evidence for! What did the first lathe look like? We are not sure, but we can come to a reasonable conclusion bearing in mind the materials and technology available. There are just a few early illustrations that give us some insight plus the continuing use of simple technology in parts of the under-developed world. A simple sketch by the Italian genius Leonardo Da Vinci C.1480 gives us our first glimpse of what an early treadle wheel lathe looked like.

One thing is certain, all early lathes would have been of the reciprocal variety, that is to say, the material to be turned would have been supported between two centres and spun backwards and forwards in some way. Many people will be familiar with this concept via the ‘pole lathe’ as it is still used today by certain traditional chair makers, both amateur and professional, and can often be seen demonstrated at various craft events.

The earliest illustration of a lathe is from a well known Egyptian wall relief carved in stone in the tomb of Petosiris dated some 300 BC. As with many Middle Eastern and eastern lathes of this type it was operated at ground level, in this case by two men. One man provides the power by pulling backwards and forwards on a cord or leather strap wrapped around the work piece while the turner sits opposite with his chisel on the tool rest. Due to standard Egyptian artistic convention each element of the lathe is depicted in the most comprehensible manner for the observer. This results in a misleading depiction as it appears to show a vertical lathe when in fact what is intended is a horizontal strap lathe.

Of a similar period, the Iron Age inhabitants of the Glastonbury Lake villages have been shown to be very competent woodturners. Excavations show these English West Country Celts to have produced some quite sizeable turned artefacts such as spokes and hubs for wheels. Mallets, bowls, tool handles as well as smaller items like stoppers for jars. These are all items recovered by amateur archaeologist Arthur Bullieid and Harold St George Gray over a century ago. No actual lathe evidence was discovered and so one can only make assumptions. Bow lathes could have been used for the smaller artefacts but turning wheel hubs would require more power than would probably be available from a bow lathe. It is almost certain that either pole or strap lathes were used to produce the larger items.

It is a drawing, or rather a simple sketch (see the drawing to the right) by the Italian genius Leonardo Da Vinci C.1480 that affords us our first glimpse of what an early treadle wheel lathe looked like. The main elements required for foot propelled continuous rotation is clearly shown for the first time; the flywheel, crank and treadle. It was the crank, in conjunction with the flywheel that provided a huge technological advance (the principal is still used in our modern internal combustion engines). The crank, linked to a treadle provided constant rotation whilst the momentum of the large flywheel ensured the crank was carried over it’s ‘dead spot’. The sketch also shows an adjustable tailstock with a threaded cranked handle.

Many of Leonardo’s inventions have been put to the test in recent times, indeed a number of them, such as his hang glider have been the subject of absorbing television documentaries. Because it appeared that no one had previously attempted to recreate the great mans lathe, to see if it was a viable and practical machine, the Worshipful company of Turners decided that such a project would be a fitting part of their quarto-centenary celebrations.

I was commissioned to recreate the lathe in time for the June exhibition, ‘Wizardry in Wood’, held at the Pewterers Hall, London. Although the concept is very simple, with the original being a collaboration between turner and blacksmith, the end result is a surprisingly powerful machine. The kinetic energy produced via foot treadle and flywheel is amazing. This is only one small step in historical science but we have proved that yet again Leonardo got there first, and yes it does work!

Whether Leonardo Da Vinci actually designed this treadle lathe or whether he just sketched what was already in existence will always be a matter of debate, but one thing is for certain, without it there would not have been, could not have been an industrial revolution! This lathe is the first machine tool, the father of all others that went on to produce ever increasingly complex machines leading to the industrial age we live in today! 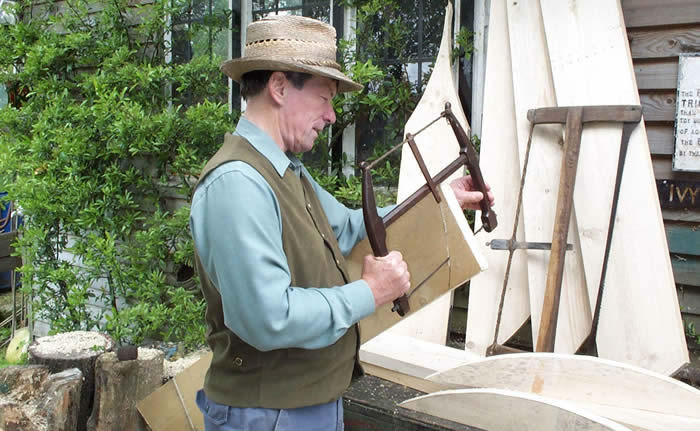 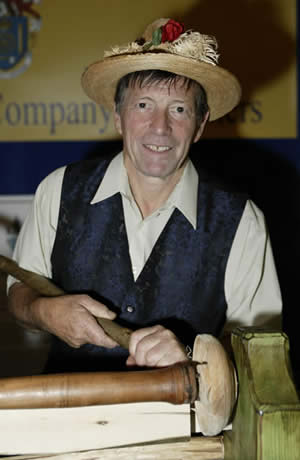 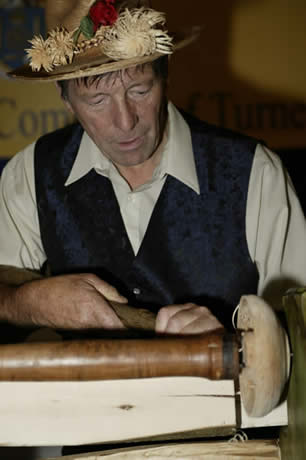 A tribute to Leonardo Da Vinci by stuart King, a plaque turned from oak and lime and pyrographed. 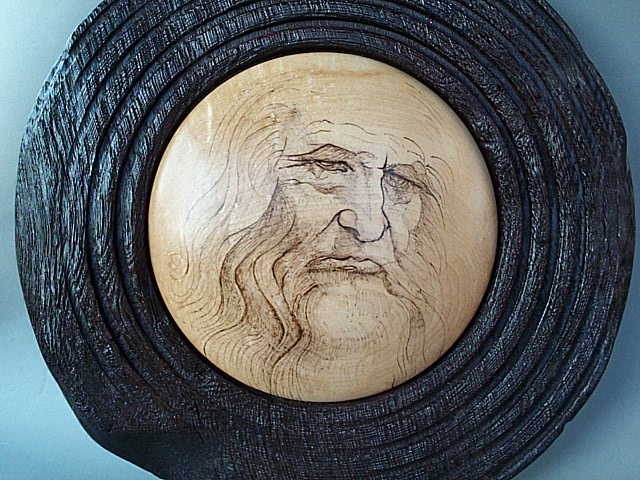 Read my History of the Lathe »