You are here: Home / Article / Khokhloma Ware: Folk art for the masses

Virtually no visitor returns from Russia without a painted wooden souvenir reflecting the traditional ‘Khokhloma’ folk art. Khokhloma ware has a very long tradition and can be traced back to both the monastic and peasant culture of the seventeenth century. The predominant materiel used in making these various decorated containers and tableware is Birch, Lime and Maple.

“The northern part of the Gorky region (of Russia) is a single glorious expanse. A green carpet of water meadows spreads along the lower left bank of the Volga and beyond them stretch boundless forests. In autumn these forests are particularly beautiful: dense firtrees enhance the yellow -tinged lime and Birch; the luxuriant maple canopies turn purple and orange and the sun tints the venerable oaks with noble bronze”.

So runs a kaleidoscopic contemporary description of an area that includes the Nizhni-Novgorod region long famous for its colorful woodware.

A recent Russian writer describes his folk art as follows ‘the motifs of Khokhloma painting are both simple and poetic, consisting of floral and plain geometrical patterns. Flowers and clusters of berries interwoven with sweeping grasses and golden tendrils curve gently over the wooden surfaces. Some of these compositions are restrained, others lavish; but all reflect the Russian people’s love of nature and quest for beauty. Khokhloma ware derives its bright, festive character from a distinctive matching of scarlet, black, Silver and gold. This dignified and lustrous combination gives the woodenware an aura of great value. What is all the more remarkable is that Khokhloma “gold” is not real, but the ingenious invention of Russian craftsmen’.

To achieve the gold effect on wood is far from simple. First, the unpainted articles are primed and coated with drying oil. Next they are polished with powdered aluminum (powdered tin and more rarely silver were used in the past). The ‘silvered’ wares are then painted with heat resistant Colours, varnished and fired in kilns. The heat turns the varnish yellow, the ‘silver into ‘gold’ and mellows the vivid design with an even, golden tone’

The Khokhloma folk art, (named after a small village) has a long history with evidence going back to at least the seventeenth century. In a letter to his bailiff a certain boyar called Morozov issued an order in 1659 for the following. ‘One hundred painted dishes polished with powdered tin, both large and medium, of the very same kind possessed by us earlier, not forgetting twenty large painted wine bowls, twenty medium and twenty somewhat smaller’.

By the eighteenth century painted ware was being produced all over Russia but many found the original Khokhloma ware a hard act to follow, even today the best work comes from the traditional region. The majority of Khokhloma ware is turned and originally intended for use. The plainer pieces were used every day, even by the peasant community. The finest, highly decorated items were brought out for special occasions only.

The observations of a court physician, G. Rehmann whilst visiting Markaryev fair, the largest in Russia in 1805 give us some idea of what was being produced at that period.’ Among many other objects worthy of curiosity, I was often astonished by the great bowls of as much as one and a half arsheen (equal to 107 centimeters) in diameter turned from wood which did not show the least signs of cracking, in spite of the scorching heat and the strong reflection of the suns rays from the sand where they lay. There were smaller bowls than these with lids, which held up to forty smaller ones placed one inside the other’. Rehmann concluded his observations with, ’these are veritable examples of the art of turning’.

The popularity of Khokhloma ware was such that production had expanded to other regions to meet demand and led to the manufacture being highly organized. The Nizhni-Novgorod Provincial News wrote in 1855; ‘There is remarkable activity in the Khokhloma region, one village makes wooden blocks from which another turns bowls while a third village paints them’. Over five hundred woodturner’s workshops were situated in the Semionov district alone. This is an Interesting division of labour and an unusual example of mass production throughout a large rural area, how I wish I could have been there to record the process!

It is stated that many of the lathes, being water powered were set up in workshops along the banks of the small but fast flowing rivers Kerzhnets, Linda and Uzol, ‘hand’ driven lathes and others powered by horses also existed. 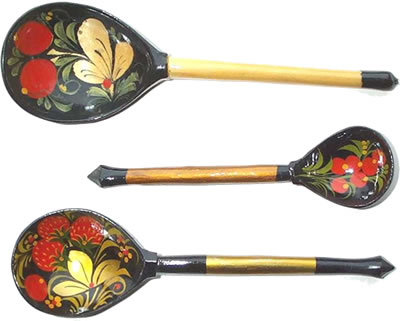 The output from these turneries was eagerly purchased by the peasant dyers of Khokhloma. ‘ These craftsmen lived in tidy, close-knit community’s and their premises were unmistakable: a dye-house smelled strongly of paint and burned drying oil and it’s entrance was always cluttered with baskets containing the finished wares. A wealthier peasant would own a large dye-house equipped with two enormous kilns, numerous drying shelves and a spacious cellar where there was room for ten people to work’. Men, women and children were involved in priming, coating with drying oils and applying the final decoration.

It is amazing that what started out as a true folk tradition over 300 years ago is still thriving and remains basically true to it’s roots, albeit on a more organized scale. Apart from Khokhloma ware most visitors to Russia will have at least one set of Matrioshka dolls in their luggage. These dolls within dolls have long been a source of fascination. The undoing of the main doll to reveal others almost ad-in-finitem has always produced wonderment and appreciation for the woodturner’s art. 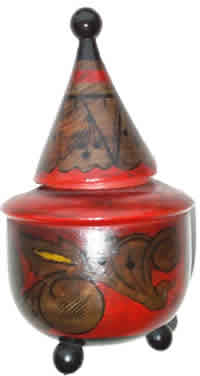 The inspiration for Matrioshka dolls is said to originate in Japan. The Hakone region has been associated with Marquetry and ‘inlaid’ turnery for nearly two century’s (much like Tunbridge wells, England). Amongst the gift and souvenir items produced were wooden eggs in which smaller eggs decreasing in size are contained within each other. These came in sets of twelve or thirty-six. It is recorded that a Yumoto teashop owner was selling such eggs in 1844. Missionaries from the Russian Orthodox Church who had established a mission in Tohnosawa and visited Hakone during the summer took the wooden eggs home to their motherland as presents towards the end of the nineteenth century.

One can imagine the appreciation the Russian woodturners would have had for these Japanese works of art and how well the concept fitted into their own tradition. With their natural flair for ‘folk art’ the Russians have produced something that is totally identifiable theirs.