You are here: Home / Woodturning / Samuel Rockall: last of the chair bodgers

A traditional Chiltern Hills way of life ceased when Sam Rockall died aged 84 in 1962. The local newspapers announced: Samuel Rockall, the last of the Bodgers is dead.

The proud brick quoined flint cottage still stands alone on Summer Heath, once home to the Rockall family for an uninterrupted 180 years. But no longer can freshly cut Beech butts be seen stacked in the shade of a tall hedge or the whinny of Dapple, the family cart horse be heard from the meadow. 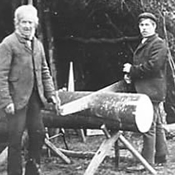 Sam learnt the trade from his uncle, another Samuel; he was born in 1823 and clearly remembered the day he was considered a man by passing a test, to carry a sack of corn. This was how a child of the time was considered fit for adult labour. Sam used to recall his uncle’s stories about his father and life in the woods and on the Heath, thus providing a continuity of family tradition and oral history way back in to the 18th cent. Uncle Sam Rockall died in 1913 but not before imparting his skills and a strong sense of tradition on to young Sam.

In the early years of the 20th cent there were about 30 chair Bodgers scattered within the vicinity of Sam’s home busily serving the demands of the High Wycombe furniture trade. Although there was great camaraderie and kinship amongst this close community never the less a professional eye was kept upon what each other was doing. Who was supplying whom and at what price? His account book for 1908 shows he was receiving 19 shillings (95p) for a gross of plain legs including stretchers. With three stretchers to a set of four legs this amounted to 242 turnings in total.

There was also endless discussion regarding the quality of timber from ‘this woodland or that,’ the state of the chair trade, the latest factory fire in town, or, just as important, the garden. Growing fruit and vegetables was taken seriously. Sam was no exception; he loved his garden and was very proud of his fruit preserves that would last his family throughout the long winters. Garden produce and money earned by the lady members of Chiltern households through lace making and straw -plait work made a significant contribution to the family budget. A bit of gleaning in the harvest fields and some poaching of the landowner’s game all made a useful contribution.

For the men it was the shave horse, side axe and pole lathe that earned the bread and so it was with Sam until the out break of WW1 when he was called up and private Rockall became company cook to the Machine Gun Corps. His recipe book still survives with hints on how to make a stockpot, bread and butter pudding and batches of 120 scones. After the war Sam returned to his beloved cottage on the Heath to live and resume his calling of working with wood, converting some of the very trees he played amongst as a child into chair legs.

At some time shortly after the war Sam decided to relinquish the pole lathe and change over to wheel power in the form of a treadle wheel lathe, something he was to continue with for the rest of his life. The workshop was conveniently by the side of his cottage with plenty of room for his lathe and equipment. Behind the lathe hung several dozen ‘patterns’, There was one for each style and size of leg, stretcher and spindle he ever turned. These patterns were in fact wooden tool rests containing marks and knotches relating to the required decoration of each turning style.

Being a perfectionist and one who preferred to turn by the bright light of the oil lamp rather than candlelight as preferred by some of his contemporaries during dark winter nights, he had this observation:

“Chair legs turned by candlelight should only be seen by moonlight”, or as they say in Bucks when referring to a full moon, under the village lantern.

Samuel Rockall was far more enterprising than most in his profession, he developed a wide range of skills including chair making, I’m not aware of another bodger who could also make the finished article. He never made chairs on a large scale but in 1924 his accounts include the following.

H.J.Massingham, a prolific writer on country matters refers to an armchair made for him by Sam Rockall in ‘Chiltern Country’ published 1940. The two men became firm friends and Massingham wrote quite lyrically about Sam;

“He can hardly be called the Sylvan deity of his Heath and woods, and yet he is a microcosm of nature, the genius of his place”.

“Things made for mans daily use by the practice of inherited craftsmanship are inevitable and yet incidentally beautiful. Beauty is the by-product, and in the same way the poetry and romance of Samuel Rockall are the by-product of his trade, his happy bird-like spirit and his life long devotion to his craft, his family, his countryside and his independence”.

He was not a man to do nothing; I can’t imagine him having spare time. If chair work was slack he would be mending coppice styles for farmers, sweeping chimneys or sharpening tools. In 1945 Sam was still finding plenty to do. Apart from woodturning his account book informs us he was doing some repair work for a local landowner including repairing a music stand, chest of draws, fitting new castors on a set of easy chairs, grinding a pair of grape scissors and putting a new handle in a garden hoe.

For chair bodgers there was also good business to be had selling firewood, much of it being the waste product from the business. For lighting fires one could buy bags of shavings from the shave horse, these could be followed by ‘chips’, the chunky wedges resulting from felling trees with an axe. Sam sold a sack of each for sixpence (2 1/2p). It appears Mr, Rockall also supplied bodging tools for in 1946 his book tells us:

Summer Heath is still a quiet place where today it’s peace is more likely to be invaded by recreational horse ridding and airplanes rather than the sounds of mans labour with saw, axe and lathe.

I will leave the last words to Samuel Rockhall’s Friend H. J. Massingham:

“When I left this time, he pressed on to me a sack of kindlings, a bag of nuts and a pot of his blackberry jam. One had to take them. Was he not a rich man? He is the wood-master. He has wood to burn, wood to carve and to turn, wood for furniture, what more could Sylvanus Rockall want? Surely he will climb to heaven up the tree of life.

Samuel Rockall’s bodging tradition was captured on film shortly after he died in 1962. His two sons helped in the reconstruction of his working life in the woods and his workshop. The colour film was produced by the furniture manufacturer Parker Knoll and follows the complete process using Sam’s own tools and equipment. A copy can be viewed by appointment at the High Wycombe Chair museum telephone: 01494 421 895.