Similar to the BBC’s popular Strictly Come Dancing, this was a competition in which the 12 turners competed against each other at the lathe.

They were tasked with creating items such as a vase, goblet and lidded box in an incredibly short eight minutes. 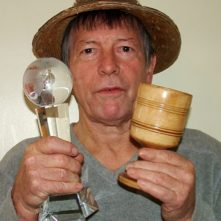 At the end of the first round, the four turners with the most votes (as cast by the delegates in the audience) went through to the semi final. The four were Nick Agar, Jason Breach, Stuart King and Tracy Owen.

The final was contested between two show men of the woodturning world – Nick Agar and Stuart King. Although Nick had the X factor and was a big hit with the ladies in the audience, Stuart… with great flurries of showmanship including pompoms, balloons and a Halloween mask …ultimately secured the judges’ votes and was crowned the winner of Strictly Woodturning 2009. It was a uniquely entertaining night.