You are here: Home / Article / The Bucklebury Bowl Turners 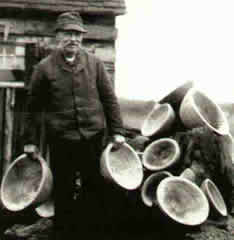 When things are commonplace they are often taken for granted but when the ‘everyday’ nears extinction we sit up, take notice and begin to realise the value of what has become unique. This was in some measure the story of George William Lailey (1869—1958), bowl turner of Bucklebury Common, Berkshire. Both George Lailey’s father and grand father (both named William) were bowl turners producing bowls of various sizes, plus a few platters, bread boards and handled scoops from the local Elm. Although Elm predominated occasionally other local timbers were used such as Chestnut, Sycamore and Beech.

The common was an isolated idyll of rural England, a mixture of open heath and mixed woodland surrounded by a scattered community of small cottages and farmsteads. Last century the Lailey home was a cottage on the edge of the common at Miles Green where the family was also engaged in farming.

The fascinating thing about the Laileys was that all their work was turned on a pole lathe that would not have been out of place in an Anglo Saxon workshop. It always amazes (and pleases) me that occasionally an antiquated tradition can compete successfully with modern techniques over a sustained period. By 1900 power lathes were readily available and in common use yet we see George Lailey using the pole lathe right up till the day he died on December 15th 1958 aged 89 years. His death is fittingly commemorated with a wooden grave board a stones throw from the common he was so much a part of. 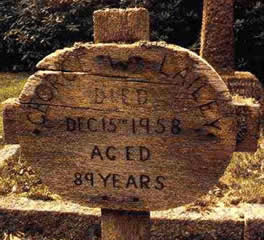 By the end of the 19th century when much hand work had fallen prey to the industrial revolution the Laileys were as busy as ever. The aesthetic movement, a reappreciation of things made by hand and a revolt against mass production was spearheaded by the likes of William Morris. For a while the new arts and crafts movement was strong enough to sustain a demand for craftsman made, artisan quality items. About this time the Laileys (both father and son George) were supplying Harrods and other leading London stores with bowls varying from as small as 3 inches up to a whopping 24 inches in diameter. They ranged in price from fourpence ( less than two new pence) to seven shillings (thirty-seven new pence) in 1907. A visitor to the workshop at this period counted 380 bowls of differing sizes and in various stages of completion.

George’s father died in 1912 but he carried on much as before, his mother helping to cut the logs with a cross cut saw. The First World War brought further business in the form of wooden ladles, one of his specialities, these were to be used for the handling of gunpowder. These ladles were very time consuming to make. The ladle bowl and handle were made from one piece of wood, wasteful of material and quite tricky to make.

A visit from the writer of country matters, H, V, Morton resulted in favourable publicity upon the publication of ’ In Search of England’ (1924). From this date people increasingly beat a path to the bowl turners door, he was now a celebrity. By now he was signing and dating the bottoms of his bowls in pencil at the invitation of visitors and collectors. They seldom left his workshop without taking a black and white snapshot as proof of their visit, and nor without signing his visitors book.

The old wooden hut contained two pole lathes, the oldest said to be 150 years old and the only thing left standing when the original one blew down towards the end of the 19th century. A new wooden building was raised around the lathe and life continued as normal.

Although Elm bowls were the staple product other items were made from time to time. George’s grandfather used to make weighing scales of the type used in certain shops before strict county council laws came in force. The scales consisted of two turned shallow dishes each suspended by cord from each end of an arm that pivoted at the top of a turned vertical Standard.

Large Elm logs were delivered to Bucklebury Common or near to the family cottage at Miles Green. They stood in a pile for at least two years before being converted into bowl blanks. By this time most of the bark had fallen of and the timber became ‘kind’. A long crosscut saw was used to cut the wood into bowl lengths, which in turn were sawn length ways to produce half log sections. Each half log was then trimmed into hemispheres using a side axe.

The Lailey lathe was typical of its type, incorporating a 17-inch pole, either of ash or the preferred alder as the spring return mechanism, and a flat leather strap fixed between it and a foot treadle. A four-pronged mandrill known as a ‘mamper’ was driven into the bowl blank with the other end fixed into the tailstock or ‘poppet’ and the bowl blank into the Headstock. The leather strap was wrapped around the mamper and with a downward thrust of the foot treadle the blank revolved towards the turner and his tools. The motion was reciprocal with the spring of the pole returning the treadle to its original position. When not in use a careful worker fastened the treadle so as not to put a strain on the pole, it was then said to be ‘dressed’.

Bowls were ‘roughed out’ and put aside for about ten days, great care being taken not to expose them to direct sunlight or to much wind. Some of these part-finished bowls inevitably warped somewhat, these where filled with damp shavings, placed upside down and covered with more shavings for a further period of time.

When ‘roughed out’ bowls were returned to the lathe. The out side was first turned true, the bowl was then reversed, the edge trued and the interior completed. Beeswax and turmeric root was kept in a small bowl on top of the Headstock and was applied to the bowl as it spun in the lathe to create a bright yellow polish. After the bowl was taken from the lathe the centre projection (core) where the mamper was fixed needed to be removed, this was achieved using the ‘topping adze’. The rough centre was finally ‘cleaned up’ and finished using a small curve bladed spokeshave.

One of the Laileys specialities was turning ‘nests’ of bowls, as many as five from one large bowl blank. This of course was a very economical use of timber but required a great deal of skill in manoeuvring the long curved shanks of the tools as they entered and followed a sweeping course into the centre of the wood.

Most Bucklebury tools were of the hooked variety, many having long handles and shanks terminating in a very small hook. These were fashioned by the turner himself. When an edge broke the tool was put in the fire and remade by hammering to a fine point and pulling it into a new hook profile. It was heated once more until a bright Purple Blue colour was reached and then plunged into cold water to temper it. Small fine-grained slip stones kept in a small bowl of water were stored nearby to sharpen the tool edges. Sometimes the fine hook edges got too hot during turning and needed to be dunked into cold water to preserve their temper.

In 1907 George Lailey recalled being visited by a local lady whom he had not seen for some while, she had a complaint regarding one of his bowls bought thirty years previously. It had become worn and thin due to daily use, she said

‘ I sposed I must ave another