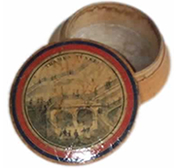 Segmented turned work has had its devotees amongst woodturners both amateur and professional since the 1930s (who remembers those two toned, brick-like biscuit barrels and fruit bowls?). In recent years some remarkable three-dimensional work has been produced, much of it pushing the boundaries of what would seem possible, some of it appearing in the pages of ‘Woodturning’. I wish to introduce you to some of the most exquisite ‘segmented’ turned work ever, and it was created with tools and equipment seen almost exclusively in museums today! I am referring to ‘Tunbridge ware’.

Tunbridge ware has become the term used to describe a whole range of ‘inlaid’ novelties and souvenirs including both turned and non-turned objects. The centre for this trade was, as indicated by it’s name, Tunbridge Wells and nearby Tonbridge in Kent, England.

It was the efficacious spa waters that led to Tunbridge wells prosperity, the town was fashionable with the wealthy seeking cures for their many ailments and was patronized by royalty as early as 1630. In 1661 the diarist John Evelyn, upon visiting his wife at the spar resort wrote, “I greatly admired the extravagant turning —toys—Yew wood tea sets” (miniature).

By 1697 another visitor, Celia Finnes observed,

“Shops full of toys – and all sorts of wooden ware which this place is noted – in both white and Lignum Vitae wood”.

Two of these early manufacturers were George Wise and a producer named Jordan, both noted as working in 1685. The wise family was still involved with the Tunbridge ware business C. 1860s, and would have witnessed many changes throughout that period.

The Tunbridge Wells spar economy was booming and it seems the local turners and other craftsmen responded efficiently to the demand for quality souvenirs. The first reference to inlaid work appears to be in 1762 when the art critic Samuel Derrick records sending a present to a friend. It was a dressing box and set of toilet boxes of ; “’Tunbridge Wells’ inlaid with highly polished yew, cherry, Holly and other woods of which the neighborhood yields great plenty”. The inlay referred to at this date would have been veneers and not the ‘stickwork’ and ‘mosaic’ work of the nineteenth century.

It was probably always the case that apart from the quality pieces, aimed at the more wealthy visitors, rather cheaper and more utilitarian turned ware (often simple lidded boxes and toys) were produced. These would be aimed at the not so wealthy pockets of middle class patrons who wanted an affordable momento of their stay. Between 1790—1830 there was a vogue for light coloured polished boxes with painted decoration, often in the form of coloured lines applied whist still on the lathe. On the lids of some were pasted engraved designs printed on paper, I have an example celebrating the opening of the first tunnel under the river Thames in London.

Today, the term ‘Tunbridge-ware’ is most associated with the wide range of exquisite artifacts ‘inlayed’ with a range of contrasting woods, both native and exotics. Amongst the latter will be found Ebony, Rosewood, Kingwood, Date Palm, Black Bean, Tulipwood, and Corolmandel. The native timbers use were very extensive, the criteria for all timbers being:

Bog Oak, Natural stained Oak (green), Yew wood, Lace wood, Walnut, Laburnum, Boxwood, Sycamore, Plum, Lilac, Maple, Cherry, even Fuze and Holly from Tunbridge Wells common, all these and many more English timbers are to be found in Tunbridge-ware.
Rosewood, and to a lesser extent Ebony was the timber of choice for the solid element of most turned work during the 19th century, the dark richness of these two woods providing the perfect setting for inlaid ornamentation.

In simplistic terms, ‘inlaid’ Tunbridge ware can be divided into two main types. Firstly there are items decorated with plain veneers, or veneers made up of end grain mosaic (usually a mixture of the two) and glued onto flat (or ‘flattish’) surfaces such as rectangular lidded boxes. Secondly there are turned items produced in the main from ‘sticks’. It is this turned work that I shall concentrate on, although you will see, this is a very complicated subject and there is some ‘cross-over’ between the two disciplines.

It is thought that ‘stick work’/‘mosaic work’ evolved during the second decade of the nineteenth century. Great accuracy in sawing the individual contrasting ‘sticks’ was an essential element in producing acceptable work, the slightest error was immediately apparent in the finished piece. This accuracy is all the more astonishing bearing in mind that the sawing was done with a foot operated treadle circular saw. The geometric designs were made up of a number, sometimes a large number of contrasting profiled sticks that were assembled length wise and bonded with animal glue, then held together until dry with string.

When set, these sticks, (resembling a lettered stick of seaside rock) were cut into thin transverse slices to form the decoration of a large variety of items including sewing accoutrements, gaming counters, inlays of box tops and novelties of all-sorts. Some of these ‘sticks’ were themselves turned into complete, small decorative items, this is known as ‘stick ware’. As the nineteenth century progressed so did the complexity and size of work that could be achieved. At its zenith complete castles and other famous buildings, as well as animals and birds were miraculously created and inlaid into tea caddies, writing boxes; and even items of furniture. In this age of high tech lasers and computer aided everything, Victorian Tunbridge Ware is still a wonder to behold.