You are here: Home / Blog / Wassail — an ancient English tradition

Wassailing is an ancient English tradition that is said to go back as far as Saxon and Viking times. The word ‘wassail’ comes from the Old English “Waes hael” meaning “Good Health”, to which the response would be “Drinc hael, and drinking was at the heart of wassailing. The tradition has always varied from manor to manor, from monastery to guild and street to street where wassailing latter became part of house to house carolling during Christmas tide. 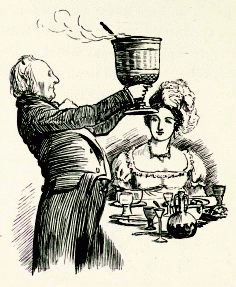 There is little doubt that this drinking to the health of ones host started in the halls of kings and noblemen and then filtered slowly down to the man/child in the street knocking on doors and singing a carol or two in exchange for a mince pie and some pennies.

Our nearest equivalent today is punch. In early times concoctions based upon ale or wine, or even cider laced with spices with fruit a-bobbing and beaten egg white a floating was the thing.

In the Halls of the wealthy the wassail bowl was often an item of status and by the 16th/17th centuries were often the centre piece of the table, many were large and elaborately turned, often from expensive Lignum Vitae wood. From this the Lord, Abbott or Guild Master would ladle the beverage into smaller vessels to be drunk as a toast.

One large wassail bowl that I turned many years ago has seen a bit of life.

It was hired by the Royal Shakespeare Company for a banquet scene and since then has made a TV appearance in two episodes of TimeTeam. Recently it was again hired for a front cover photo-shoot for Heston Blumenthal’s new cookery book.

By the 18th century wassailing had become more associated with Christmas and the working classes.

Especially. perambulating with a bowl, any wooden bowl, filled with wassail to entice neighbours to be generous in their giving.

There is also a long tradition of wassailing the fruit orchards

It generally took place on Twelfth Night (January 5th), or sometimes on 17th January, known as Old Twelfth Night. These ceremonies varied by local tradition but in essence toasts were drunk to the trees, songs were sung and sometimes wassail soaked toast was hung in the branches, all to encourage a good harvest to follow. 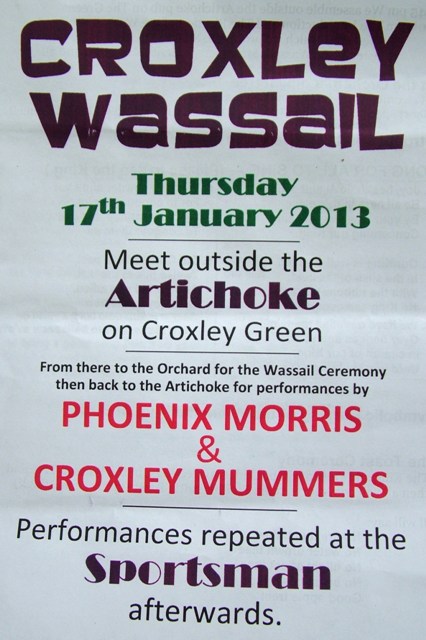 The wassailing of Stones Orchard at Croxley Green

The custom of wassailing fruit trees was revived at Stones Orchard, Croxley Green, Hertfordshire on the 17th January 2013 using a wassail cup that I have just turned from a cherry tree from Chesham.

The wassailing of Stones Orchard at Croxley Green was a fantastic affair attended by over 200 villagers who first assembled outside the Artichoke pub before setting off across the green to the orchard.

The procession was led by the Wassail King and Queen followed by the Pheonix Morris  dancers and the Croxley Green Mummers till the ancient tree was reached.

Wassail songs were sung, toast was dipped into the wassail cup filled with cider and then placed (anointed) in the oldest apple tree in the orchard.